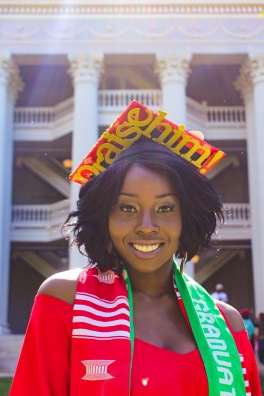 Congratulations on medical school! How does it feel to know that officially in 4 years, you’ll have an MD behind your name?

Its truly a surreal feeling to think I am halfway to the goal that I have dreamed about, planned and worked so hard to attain. At the same time, I am very nervous about what is in store. I did decent in undergraduate and by only by the Grace of God was I able to get to this point. In undergraduate, surely there was more room for excuses and shortcomings. Now I will be grouped among students who have undoubtedly excelled on many platforms and levels. Some have even taken additional years to receive their masters or even receive their PhD. The idea is extremely grounding that the playing field has been amplified times 10. After a few seconds of celebrating my accomplishment, I quickly got into the mindset of reaching the next goal. I am excited for the growth opportunity,  mentally, intellectually, professionally, emotionally, and even spiritually, and the challenge this next step will bring. The road to an MD is still very steep and now more tangible than it was less than a year ago. Because of that I have a puddle of excitement under my (I hope) well-hidden anxiety.

How did you stay sane during the application process?

As a Libra, I have always admired people who are able to master balancing their life. So much so that I taught myself yoga and different balancing techniques ever since high school. That being said, as now an alumnae of The University of Georgia, I have yet to learn how to balance my school, extracurricular, work and personal life. I get overwhelmed and distracted OFTEN. The application process was grueling because unlike most applicants I did not begin actively preparing for the MCAT until the end of May due to other time consuming commitments. I did not take my test until mid-August, after the semester had begun. I sent in my application long before I received my score or even took the test. Throughout the application process, my sanity was tested many times because I was playing a very dangerous game of catch-up while doing a research program for the Center of Undergraduate Research Opportunities at my school. In addition with the academic portion, I became sick throughout the summer. For a string of nights I would wake up coughing and feeling that I could not breath for at least an hour. I got shingles during this time; an infection most commonly seen in the elderly. And halfway through the summer, my car broke down. So I was immobile, till the next semester. I can honestly say I emotionally broke down one too many times while study for the MCAT. I have never cried so much and so often as I did in that period. I have never doubted my abilities, my intelligence, and even my sanity as much as I did in that period. Finding a balance became a daily struggle for me.

My sanity came from my mother who would reassure me that there will be a tomorrow after I take this test. If I do awfully, it is not the end of the world; I can take a gap year and take it again. The money, (oh the amount of money I spent!), was nothing compared to my inevitable success. My sanity came from the prayers that were showered over me from all corners. It came from the words of encouragement I received from so many friends, family and even strangers. My sanity was sustained from knowing that a testimony was afoot, a revelation would come from this experience regardless of the outcome.

What would be some of your “major keys” for being successful in the application cycle?

The biggest key was the support and help I received from so many different people throughout. My research professor, gave me time off as the test approached and invaluable advice. My sisters, friends like: Ijeoma, Jide, Abiola, Kierra, Stacy, Bianca, Fatai, and even random people who I have never met face to face helped me tremendously with my personal statement and other additional essays. You will need a team of people, or diverse perspectives to help throughout this process because  it will take a long time , a lot of perfecting and you do not want it all on the shoulders of a few people. Or worst, only yours. In addition to support, one of the biggest keys is having a great deal of self-motivation. I received many disappointing scores after hours of studying but I forced myself to keep trying and always to stay hopeful. Staying prayed up is so important. This process could reveal to you how badly you want something or if you subconsciously don’t. God should be your number one intrinsic support. If you do not believe in God, I advise you find something to believe in because you will be tested and not just one test day.

What advice to you have for those applying this cycle?

DON’T BE ME IF YOU CAN HELP IT. Start as early as possible. The requirements and questions asked on AAMC application do not change. Find someone who has already applied and ask them if you could look through the application and see what you will need. Start making impactful connections with doctors and professors starting freshman year. Don’t wait, because you want to make sure they have something to talk about in your recommendation. Make sure to maintain those contacts and keep them updated on your successes. Your GPA and MCAT score are the crackhead of numbers here. Keep them as high as possible. For some schools, nothing is more important. If your GPA is low, make sure you dedicate 3x’s as much time to doing well on the MCAT. If both are average like mine were, have a lot of extracurricular and other involvements to make you stand out. Research is always a good one to have. That personal statement is like a picture of your life and just a picture. It should be concise but still speak volumes. Start early. Your experiences are noteworthy–do not sell them short. If you are of ethnic descent, you already have a unique experience compared to the majority of the applicants which gives you an edge. Use it. The MCAT is only a test. A damn hard and grueling one but still just a test. It doesn’t define you and your worth. For $300 or less you can take it again. Do not doubt yourself; you have come this far. On the same note, do not force yourself to take this test if you do not actually want to be a doctor! I cannot preach that enough. Your mother or father or brother or sister is not taking it for you, will not be going to medical school for you, or practice for you. Do not let them control what they themselves will never understand. Lastly, do not fear a gap year or 2 or 3. If you are not ready or feel there are major areas you can improve, take some time and do just that. It’s a marathon, not a race. You will burn yourself out racing through this marathon. Pace yourself as necessary. Good luck.

It’s National Doctors Day! Especially proud to be in this field. The responsibility is heavy but we wear it well. Got a long way to go in my career but I’m enjoying the journey so far. Can’t believe intern year is almost over! #doctorsday #nationaldoctorsday #wearfigs #familymedicine
Felt good to get out of my scrubs for a night! Happy holidays loves ❤️ #holidayparty #tistheseason #portraitmode 📸 @iambeautiful_me90
Easier said than done, right? These last couple months, I’ve felt like my job was defining my life. I became this work-home-work-home robot. After some reflection & reaching out to people, my simple solution is to do one new/different thing each week. It’s made a big difference! Sounds so silly, but even I have to be intentional about this stuff otherwise by default I fall back into the routine. What’s something you have to be intentional about in your life? #balance
Your comfort zone is getting tired of you. It’s time for you to go & do something different! #stepoutofyourcomfortzone
The days are long but the years are short. Time is fleeting, don’t waste it. #wisewords
Hey 26 🎂 looking forward to what’s to come!
Glow through what you go through ✨ . . . #thisiswhatadoctorlookslike #2monthsold #findareasontosmile #residencywontkillme #injesusname 📸 @coxinhibitor
Do I look like a doctor yet?? If not, oh well! It’s day one on the job! 😁 #whatsupdoc
If you’re not uncomfortable, you’re not growing! Embrace the challenges that come with growth. I know this is definitely an uncomfortable season for me between moving to a new city and starting a new job. Repost from @imtheadaeze
Blog posts Fourth Year Intern year Lessons learned Pre-med step1 Third year Uncategorized Words from the Wise
%d bloggers like this: